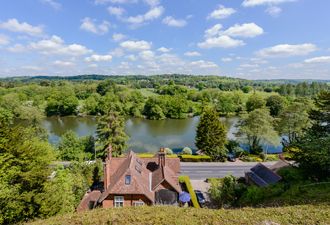 •21% of adults would like to move to a waterside location while they have a young family.

•73% of under 45s regard living by the water as an obtainable aim.

Strutt & Parker’s 2018 Waterside Survey, with 2,000 respondents, shows that young adults are driving the demand for waterside living in the UK. In contrast to the popular perception that it’s mostly older retirees who aspire to live by the water for health and relaxation reasons, the survey results highlight that over a quarter (26%) of under-35s and over a third (36%) of 35-39s are actively looking to live near water within five years, along with and 27% of 40-44s. This compared to just 12% of over-45s. There is an element of nostalgia for under-35s, with 16% wanting to return to their childhood home.

Whilst people either aspired or did move to a waterside location at the average age of 43, the results demonstrated that four in ten (41%) adults want to move to be closer to the water before the age of 35.

The rise in flexible working is helping to facilitate the move to waterside living among young professionals. Among employed adults already living in waterside properties, 49% work from home. This rises to 61% of employed adults in their early 30s (30-34) and 78% in their early 40s (40-44). Those working from their waterside properties do this for three days a week on average. The Telecommunications, Technology, Internet & Electronics sector is one of the industry sectors driving the trend, with 77% of workers in this kind of job working from their waterside home. This compares to 25% in Education and 33% in Healthcare & Pharmaceuticals.

Living by the water remains a top aspiration

Like last year’s survey showed, the lure of waterside living remains strong – and crucially most people do see it as an obtainable aim. Among those that do not currently live near to water (within three miles), 57% said they would like to live by the water in the future, with 29% hoping to do so in the next 10 years and 28% at some point.

Interestingly, there was a jump in the number of people who wanted to make the move to the waterside in the nearer future, with 18% saying they are actively looking to move close to water in the next five years. This is up from 12% in 2017. Among under-45s who would like to live near water in the future, 33% believe it’s very much obtainable and 40% somewhat obtainable. In comparison the majority of over-45s say it is not obtainable (56%).

Richard Speedy, Head of Waterside at Strutt & Parker, said: “It’s encouraging to see that nearly three quarters (73%) of under-45s regard living by the water as an obtainable aspiration. Waterside living has so much to offer – inspiring a more active outdoors lifestyle and a really sociable environment for spending time with friends and family. Our survey showed that the nation’s top five favourite waterside activities were exercising (46%), eating out (31%), picnics (31%), socialising with friends (29%) and sunbathing (29%) – highlighting the rich variety of activities to do in your free time when you live beside the water, whether it’s a river, loch or on the coast.”

“This year it’s been interesting to see that more people are being lured to the waterside by the promise of good food – 15% up from 7% in 2017. Food and dining out is becoming an increasingly significant attraction of waterside living, with the ‘foodie’ scene, café culture and pubs/restaurants all being in the top 5 lifestyle elements associated with living by the water. Unsurprisingly, our national dish of fish and chips came out on top as the nation’s favourite seaside cuisine with 56% of respondents voting for it, but crab, lobster, mussels, potted shrimp and cockles and winkles all appeared in the top 10, showing our diverse taste for delicious, fresh seafood.”

The main reasons why people do, or would choose to, live close to the water are:

Vanessa Hale, Director of Research at Strutt & Parker, said: “As concern over air pollution grows, better air quality has overtaken ‘views’ to become the second top driving factor. It was interesting to note that 41% of adults aged over 45 wanted to live near to water for their mental wellbeing, against 27% of under-45s.”

“The links between living by the water and benefits to mental health have long been documented. Marine biologist J. Nichols recently launched some ground-breaking research on proximity to water and well-being, coining the phenomena of stress-relief as having a “blue mind”. A study by Michigan State University using data from New Zealand has also uncovered the pronounced health advantages of living in a coastal home. Residents in properties with an ocean view were happier than their land-locked neighbours. It was the first report to find a link between health and visibility of water, which scientists call “blue space”. The study showed that increased views of blue space were significantly associated with lower levels of psychological distress, which wasn’t found with views of green space.”

“Our survey reflected the desire many people have to own a property with fantastic water views – a huge 79% of adults who live near water, or would like to in the future, would be looking to invest in property with outstanding views over water. 55% would pay 10-25% more for this benefit.”

Dr George MacKerron has carried out the world’s largest geo-located wellbeing study at the London School of Economics which corroborates some of the research findings of Strutt & Parker’s 2018 Waterside Survey. His study, called ‘Mappiness’ (https://mappiness.app), has had over 3.5 million responses from more than 65,000 individuals and provides new lines of evidence on the environmental impacts on wellbeing.

Dr George MacKerron comments: “When conducting our ‘Mappiness’ research, we have the GPS location of every response, and can therefore join reported happiness values with other data over time and space, including weather and land cover type (as remotely sensed by satellite), all feeding into a statistical model of happiness. When we do this, controlling dozens of other factors – including what people are doing, whom they’re with, the time of day, day of the week, and even each person’s own average happiness level – we find that the ‘marine and coastal margins’ habitat type, which includes estuaries and wetlands, is by some distance the happiest of all natural environments.”

Types of waterside properties in demand

Among those who live near the water, or would like to in the future, the preferred type of waterside to live near to is the seaside/coast (52%), followed by lakes/lochs (17%) and rivers/estuaries (13%). There has been an increase in those who desire to live near to docklands (7% compared to 1% in 2017), perhaps reflecting the increasingly dynamic and aspirational nature of dockland regeneration areas such as those in London and Liverpool.

Among those who live near water, or would like to in the future, 42% said they would be looking for a property with direct beach access. Half of those looking for this (51%) would be willing to pay 10-25% more on the price of the property, in comparison to a property in the same area that is not directly on the waterfront. Nearly a fifth (19%) would be willing to pay 25-50% more.

Those living in London currently are the most likely to be seeking a property with direct water access for a boat such as a mooring (69%), paying up to 10% extra for this (43%). This may be linked to the fact that adults in London are the most likely of all regions to have a penchant for fishing (20%).