Stunning countryside and beaches, excellent schools and quiet country living – there are many reasons to move to Dorset. 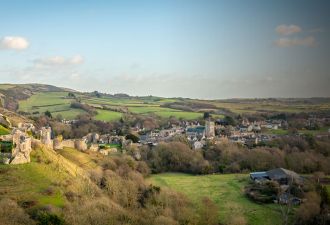 Dorset is a popular location for families or early retirees who want country living within easy grasp of the city. We look at what makes property in Dorset so special.

There are many places that may claim to be the UK’s top beauty spot, but Dorset has to be among the top few. Along the coast, you have golden sandy beaches and dramatic natural formations such as Durdle Door, Lulworth Cove and Golden Cap. Inland, there are rolling chalk grasslands, ancient meadows and woodlands and wild heathland.

This variety of landscapes and habitats make it a haven for many types of wildlife. The idyllic sanctuary of Brownsea Island is one of the most popular nature reserves in the country, but there are plenty of less frequented reserves to get away from the crowds.

It’s also great for outdoor activities. From walking the coast path to sailing and water sports, there are lots of opportunities to enjoy the beautiful countryside.

With a surprising concentration of excellent schools in both the private and state sector, Dorset is a great place for families.

Some of the most popular independent schools include Sherborne School and Sherborne Girls, Bryanston School in Blandford Forum and Clayesmore School at Irwene Minster (which also has a pre-prep and prep school). There are a plethora of fantastic prep schools including Port Regis, Sandroyd (both on the Dorset-Wiltshire border) and Hanford (near Child Okeford).

A quieter pace of life

If you’re looking for a quiet country life which isn’t too far from the faster pace of the capital, Dorset offers a great balance between country life and access to the city.

The journey time by train from Gillingham (in the north of the county) or Bournemouth (in the south) to London Waterloo is around two hours, making it a long but commutable option for city workers. Bournemouth airport offers frequent flights to European airports – handy for business travel and winter sun getaways.

You may not need to run away for winter sun though as Dorset has some of the best weather in the UK. Find a sheltered spot and it’s not unusual to be wearing short sleeves on a sunny January day.

Where to live in Dorset

The pretty market town of Sherborne has its fair share of medieval buildings, great food and independent shops. It’s also on the main rail line to London and has excellent schools including Sherborne International School which supports non-British students entering the British education system.

A little further east, Shaftesbury is a quaint Saxon town made famous by Gold Hill, one of the most well-known and picturesque streets in England. As might be expected for a hilltop town, there are fantastic views across Blackmore Vale. There’s no train station, but it’s only 15 minutes’ drive to Gillingham mainline station and the A303.

Further south, you’ll find the market towns of Blandford Forum, with its Georgian brick houses, and Dorchester, which is closer to the Jurassic Coast and has some excellent state schools.

Sprinkled in between the larger conurbations are plenty of pretty small villages with characterful, chocolate-box thatched cottages and limestone farmhouses nestled within undulating farmland.

Property in Dorset is typically less expensive than the neighbouring counties of Wiltshire and Hampshire, but there are plenty of high-value pockets – the tiny peninsular of Sandbanks is home to one of the most expensive coastlines in the world.

Here are a few of our favourite Dorset properties:

How farms and estates can stay ahead on water management