Our latest Strutt & Parker Scottish Residential Quarterly reports on a market characterised by lack of supply with location, accessibility and connectivity remaining key. Market sentiment has improved considerably at the start of this year and although we expect continued caution in the near term, the outlook for property remains optimistic. 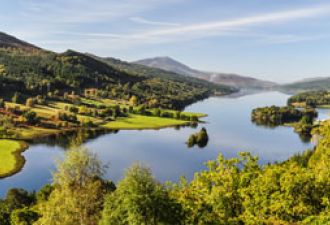 The latest Scottish Business Monitor shows signs of improved confidence in the Scottish economy and a positive outlook for 2020. Prospects for business activity, investment and employment are now at their highest level for six years.

Although subdued, growth expectations are also promising. The Scottish Fiscal Commission have forecast GDP to rise 1% this financial year increasing to 1.1% in 2021 and 1.2% in 2022-23. The latest RBS purchasing managers index (PMI) showed manufacturing and service sector output at a 14-month high of 52.0 in January. Permanent hiring and starting pay were also up last month according to a monthly survey of Scottish recruitment specialists.

Digital connectivity and improved broadband continue to boost the rural economy. Commsworld have announced the use of 200 kilometres of dark fibre to provide connectivity to rural locations in southern Scotland and FarrPoint are helping to deliver the Scottish Government’s 5G strategy by supporting the infrastructure group, Scottish Futures Trust.

Determined to fight climate change and reach net zero in 2045, the government has announced £1.8 billion of investment in low carbon infrastructure as well as peatland restoration and planting new forest across Scotland.

Scotland continues to see property prices rise. According to the Nationwide House Price Index, UK property prices grew by 0.8% in the year to Q4 2019 while Scotland recorded YoY growth of 2.7%. RoS data shows that average prices for Scotland in Q4 2019 reached £184,446, 9% above their levels five years ago in the same quarter of 2014 and nearly 60% higher than in Q4 2004.

The City of Edinburgh average fell 2.5% over the year to £266,248 but a lack of supply underpins the prime city centre market. The prime EH10 4 and EH3 6 postcodes Morningside and New Town both saw substantial price increases in Q4 2019. Prices fell slightly (0.9%) in Glasgow over the year to Q4 2019 but demand remains robust. The delivery of new homes in the West End has improved availability at the top end of the market with prices averaging £289,668 in Q4 2019 in G12.

Location is key and performance is driven by accessibility and connectivity. In the centrally located regions of Stirling and Perth & Kinross prices reached an average of £212,877 and £201,199 in Q4 last year respectively. East Lothian (8%) and Falkirk (6%) saw some of the largest regional gains with prices up significantly over the year to Q4 2019, with East Lothian averaging £269,762.

The market remains uncertain but we anticipate further growth in 2020. Although the supply of properties remains low, demand is generally robust and this is reflected by an overall annual increase (2%) in transactions. Properties priced over £1m have seen volumes increase by more than 50% compared to Q4 2018. In contrast, sales of properties priced between £750,000 - £1m are down 23% on Q4 2018.