The past, present and future of the UK farmland market

Q4 2019
Home Knowledge and Research The past, present and future of the UK farmland market

Strutt & Parker’s Farmland Database is a detailed record of land sales dating back to 1996, which offers a valuable insight into the past, present and future of the UK farmland market 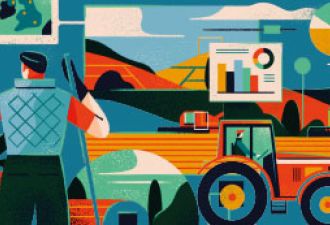 The headline is that the farmland market has proved far more resilient over the past couple of years than some had predicted, with average land prices holding up well in the face of Brexit-related uncertainties and unprecedented weather.

According to Michael Fiddes, Strutt & Parker’s Head of Estates & Farm Agency, the farmland market is more complex than is immediately apparent from average values, with a number of key trends proving to be highly influential.

‘One of the most significant trends of recent years has been the growing role of buyers with capital to invest which has been sourced outside of farming,’ he says.

This has been driven by uncertainty about the future of subsidy payments and trade, resulting in a lack of confidence to borrow to fund purchases.

‘As a consequence, a greater percentage of the market is being driven by lifestyle buyers, individuals with rollover funds from the sale of development land or those looking for an asset with long-term capital growth.’

‘Forestry investors have been engaged in ferociously competitive bidding for marginal farms with the potential for planting.

‘As a result, values for such hill land have increased significantly, with investors paying prices of nearly £3,000/acre – when agricultural values for similar ground without afforestation potential range from £600-£1,000/acre.’

Another factor underpinning values is low supply to the market, with the first eight months of this year seeing the lowest amount of land marketed for many years.

‘It was something that we expected, as we have seen in previous rounds of Common Agricultural Policy (CAP) reforms that where there is uncertainty, there tends to be a fall in the amount of land marketed,’ says Fiddes.

‘It also reflects a longer-term trend – we know volumes marketed over the last five years have been significantly lower than those seen in the 1980s and 1990s. This is even after private sales are factored in.’

In view of this, there is a chance that more land will come to the market in 2020, when there is more certainty about future policy, but the significant variation in prices will continue, with location and size proving to be critical factors.

‘Farmers may be reticent to buy in the short term, until they know more about the future. But I believe the market will be underpinned by non-farmer buyers who see the value in landownership,’ says Fiddes.

‘Investors may well see farmland as more appealing in the face of wider economic uncertainty and we have already started to see overseas buyers become more visible in the market, taking advantage of the relative weakness in the value of sterling.’

This is an abridged version of an article that first appeared in the Autumn/Winter 2019 edition of Land Business. To read the full publication visit this page.