Edwardian architecture draws from the best of preceding eras, blending key features into a new style that remains popular today. Read on to discover the definitive Edwardian property and its corresponding landscape. 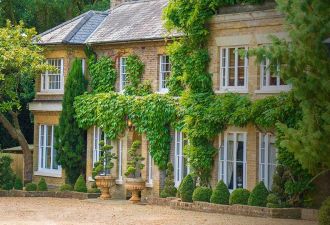 Although the Edwardian period spanned a mere nine years from 1901–1910, the construction boom of the time means that Edwardian architecture is prevalent in the modern architectural landscape of today. Exemplary building standards and a fascination with light and airy rooms are just two of the reasons why many elect to buy an Edwardian house for renovation.

Often based away from the hubbub of the city, Edwardian houses are frequently surrounded by gardens that blend architectural design with an artist’s palette of colour. This era of home exemplified the quintessential English country house, with the rise of the “garden suburb” creating new tree-lined avenues in which the middle class could reside.

The key feature encapsulated by an Edwardian property is that of spaciousness and light. Large, airy rooms, partnered with wide hallways, elegant staircases and bay windows, were designed to allow daylight to warm the house.

Many Edwardian houses are characterised by a combination of red brick and pebbledash (often referred to as ‘roughcast’ in period literature). The influence of Art Nouveau styling can be seen in the elaborate porches, often featuring stained glass embedded in wood-panelled doors.

Although it was amongst the shortest architectural periods in the history of the United Kingdom’s many design eras, Edwardian property remains prevalent across the United Kingdom. This is particularly evident in the greener suburbs surrounding towns and cities, a holdover from the garden-focused Edwardian style. One of the best examples is Hampstead Garden Suburb, a model community in north London.

The growth of the middle-class suburb is considered by many to be the Edwardian period’s most enduring legacy. However, the era did have an effect on the city as well; Admiralty Arch, commissioned by King Edward VII himself, and the waterfront grandeur of London’s County Hall are arguably the best examples of the ostentatious contributions of the era to the city.

Edwardian gardens embrace the romantic nostalgia of a classic English country garden, being equally visible outside quaint cottages as imposing manor houses. Whilst the Edwardian landscape was less manicured than the Victorian garden, the natural look was carefully planned to ensure year-round colour and visual interest.

Gardens were characterised by the interweaving of the garden with structural elements. Vast herbaceous borders surrounded carefully-shaped lawns, whilst extensive formal gardens were divided into sections or “garden rooms” whose character ranged from formal to wild.

Meanwhile, the influence of the Arts and Craft movement continued, reflected in the use of traditional craftsmanship and natural materials such as dry stone walls and handcrafted gazebos. Ceramic quarry or terrazzo tiles were often used as an adornment.

As well as natural stone walls, tall yew hedges and crafted topiary added structure to the Edwardian garden. Wisteria and roses softened the hard lines of masonry-and-oak-beamed pergolas, allowing the architectural design elements to blend into the garden. Water features were an important part of the garden, ranging from formal stone-edged pools to sprawling water gardens.

Perhaps one of the most memorable features of the Edwardian landscape is the vast herbaceous border, resplendent with perennials and annuals that created a wave of colour.

Many of the United Kingdom’s most famed gardens were created during the Edwardian period.

Sir Edwin Lutyens and Gertrude Jekyll were two of the most influential Edwardian landscape architects. The legacy of their partnership is seen in the exemplary formal gardens at Hestercombe House in Somerset; Lutyens’ geometric elements combine beautifully with Jekyll’s use of bold colour, together creating the world-acclaimed Grand Plat.

See our favourite Edwardian properties for sale or browse our knowledge and research for more insight.

Read more in our Strutt & Parker Guide to the Edwardian House.